This is a text widget, which allows you to add text or HTML to your sidebar. You can use them to display text, links, images, HTML, or a combination of these. Edit them in the Widget section of the Customizer.

You all too well know the feeling, telling yourself just look at the plate

But you raise your eyes in his direction

You see the violence in his eyes

You don’t move knowing all too well what is coming

As he glares at you, then picking up an object

It comes speedily through the air in your direction

Somehow you dodged it, but knowing that this would bring more rage within him

Looking behind you to see where it went

The fear seeped in even faster, knowing you had nowhere to run to get away

He was headed your direction, the dishes hit the floor

As he smashed your face into floor, you peered out for a second to only see your face missed the glass by not even an inch

His body pressed against yours, while choking the life out of you

You vowed to never cry, you would never let him ever see the damaged he placed upon you

As his hands where still wrapped around your neck tightly, you could hardly take a breath in

You waited through all the days and nights of his raging violence, but then came the prefect moment to make your move…

He never suspected that you had any strength left in you; he thought he broke you not knowing he only made you stronger and more aware of his tactics…

To his surprise you escaped, you were out from under his kingdom of rage

Never to return to the waste he laid upon you

Knowing all the time he was the weak one, trying to prove he was a king but truly only a peasant

You are the Queen that escaped from his crippled hands… 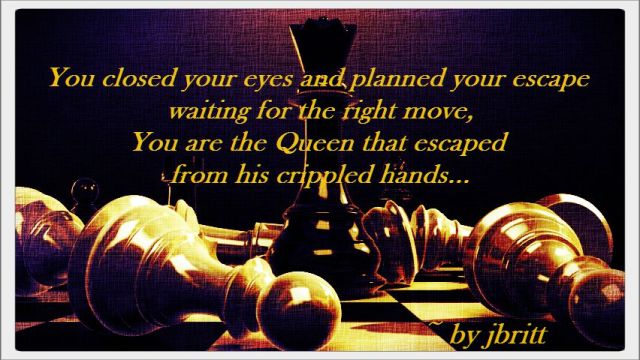 No Claim on Photo – Only Writing and Quotes